Lessons from A History of Advertising 1874

I read “A History of Advertising”, written by Henry Sampson in 1874 and there were some useful notions that have carried through the years and remain applicable in today’s world of Social Media. 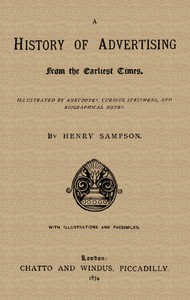 You can read “A History of Advertising” on Project Gutenberg

This is a long book, filled with adverts from history, with some expositional content on the nature of advertising.

The most useful commentary, from my perspective, really came from two articles that were summarised in the book:

I’ve pulled out a lot of quotes below. All the text from the book is in italics and I have added some minor commentary.

Henry Sampson, A History of Advertising, 1874

Some lessons from history remain relevant.

“advertising is a most expensive luxury if not properly regulated, and a most valuable adjunct when coolness and calculation are brought to bear upon it as accessories”

Henry Sampson, A History of Advertising, 1874

An old proverb about “Word Of Mouth” marketing.

…the bush, the Romans’ tavern sign, gave rise to the proverb, “Vino vendibili suspensa hedera non opus est;” and hence we derive our own sign of the bush, and our proverb, “Good wine needs no bush."

From Henry Sampson, A History of Advertising, 1874

I thought that this section on Criers was interesting, I’ve quoted it in full below:

The public criers in France, at an early period, were formed into a corporation, and in 1258 obtained various statutes from Philip Augustus, some of which, relating to the criers of wine, are excessively curious. Thus it was ordained that—

“Whosoever is a crier in Paris may go to any tavern he likes and cry its wine, provided they sell wine from the wood, and that there is no other crier employed for that tavern; and the tavern-keeper cannot prohibit him.

“If a crier finds people drinking in a tavern, he may ask what they pay for the wine they drink; and he may go out and cry the wine at the prices they pay, whether the tavern-keeper wishes it or not, provided always that there be no other crier employed for that tavern.

“Each crier to receive daily from the tavern for which he cries at least four denarii, and he is bound on his oath not to claim more.

“The crier shall go about crying twice a day, except in Lent, on Sundays and Fridays, the eight days of Christmas, and the Vigils, when they shall only cry once. On the Friday of the Adoration of the Cross they shall cry not at all. Neither are they to cry on the day on which the king, the queen, or any of the children of the royal family happens to die.”

The Crier here seems to be an exemplar of early social media engagement.

And of course the every popular “Best Time To Post” Paris Public Crier Statutes 1258:

“The crier shall go about crying twice a day, except in Lent, on Sundays and Fridays, the eight days of Christmas, and the Vigils, when they shall only cry once”

The book paraphrases a quote from Democracy in America by Alexis De Tocqueville, 1840

The original quote is:

“nothing but a newspaper can drop the same thought into a thousand minds at the same moment. A newspaper is an adviser that does not require to be sought, but that comes of its own accord and talks to you briefly every day of the common weal, without distracting you from your private affairs."

and in the context of Advertising becomes:

”… the art of advertising, and made them acquainted with the valuable assistance to be derived from a medium which, as Alexis de Tocqueville remarks, drops the same thought into a thousand minds at almost the same period."

But we now have social media.

“when the papers increased in bulk, and advertisements became common, it behoved those who wished to attract special attention to resort to contrivances which would distinguish them from the surrounding crowd of competitors."

From Henry Sampson, A History of Advertising, 1874 and we still have to do this today.

For many reasons there is a great difficulty in dealing with American advertisements. Sometimes they are too long for quotation, at other times they are too broad; and very often one is not quite sure whether or not it is a really bona fide advertisement he is reading, or only an expression of gratitude from an editor for the favours he has received or fondly anticipates.

here is a great spice of humour, and in the general run of American advertisements it is much to be feared, and only natural to assume, that a stricter code of morality would result in a vast increase of dulness, the general concomitant of prim respectability. Yet it is possible to be wise as well as witty, and even now a good percentage of American advertisers prove this.

We have already referred to the “editorials” which have a more or less remote connection with advertisements, and now select two examples with which to illustrate our meaning. They are of very opposite characters, and will serve to give both extremes, between which all sorts of puffs may find classification.

We will conclude this section of our cousins’ peculiarities with the following, picked out from a Boston sheet, where it was nestled close by the biggest of the advertisements:—

Keep on Advertising. Don’t fear to have a small advertisement by the side of a larger competing one. The big one can’t eat it up.

Which, freely translated, means, “Keep on advertising, and don’t be afraid. We’ll take you, big or little, so long as you have the money, and of course we’re quite disinterested.”

The remark, “Show me the advertisements of a country, and I will tell you the character of its inhabitants,” is not yet current among the choice sayings of great men…

it being impossible, apparently, to make a British advertiser understand that an advertisement is more valuable in proportion as it looks less like what it really is.

Localities are sometimes used in advertisements as typifying the quality of the articles advertised;

The above is a useful reminder that sometimes the images we use are important for adding extra attributes to our message: implying wealth, value, honesty, etc.

You can find the full article, indeed the full issue of The Tatler online.

“advertisements are of great use to the vulgar. First of all as they are instruments of ambition. A man that is by no means big enough for the Gazette, may easily creep into the advertisements”

A reminder that we can pay to have our content promoted even if our profile is not yet big enough for other people to pick up on it or promote it for us.

“A second use which this sort of writings [advertisements] have been turned to of late years, has been the management of controversy”

_“A second use which this sort of writings [advertisements] have been turned to of late years, has been the management of controversy”, insomuch that above half the advertisements one meets with now-a-days are purely polemical.”

Clearly many blog posts and promotional material fit into the polemical category.

“The great art in writing advertisements, is the finding out a proper method to catch the reader’s eye, without which a good thing may pass unobserved”_

True then, and True today.

Dr Johnson, in a bantering paper on the art of advertising, published in the Idler, No. 40, observes

“The man who first took advantage of the general curiosity that was excited[76] by a siege or battle to betray the readers of news into the knowledge of the shop where the best puffs and powder were to be sold, was undoubtedly a man of great sagacity, and profound skill in the nature of man. But when he had once shown the way, it was easy to follow him.”

an article written by Dr Johnson, in an Idler of 1759, on the subject of advertisements. It is very amusing, and in it he says that “whatever is common is despised. Advertisements are now so numerous that they are very negligently perused, and it is therefore become necessary to gain attention by magnificence of promises, and by eloquence sometimes sublime and sometimes pathetic.” He then passes in review some of the most inflated puffs of that period, and continues: “Promise, large promise, is the soul of an advertisement.

You can read the full article online No. 40. The art of advertising exemplified.